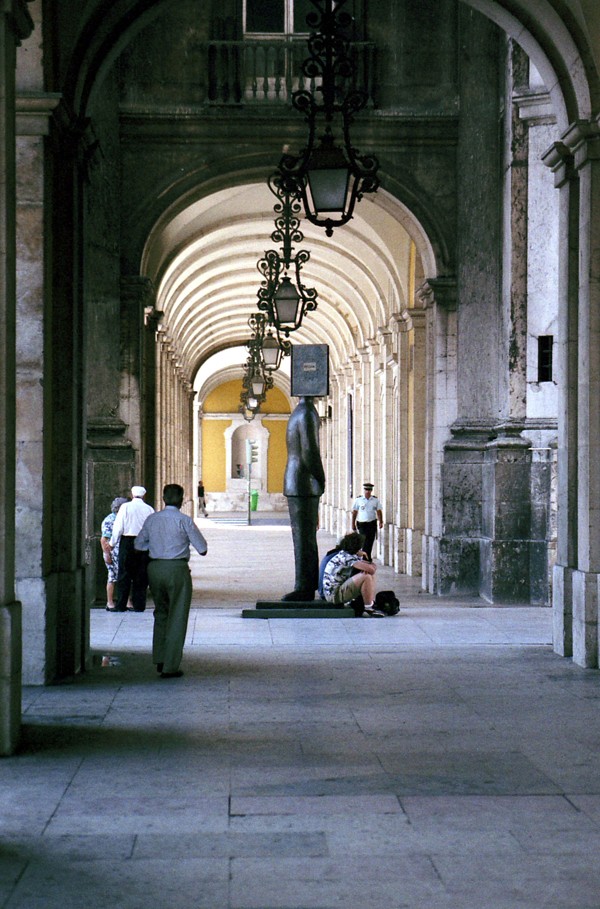 Lisbon is a confusing city. There are quite a few blocks that are not really square. On this trip, we eventually ended up close to the harbour. I believe this place is called the terreiro do paco which skirts the edge of the Praça do Comércio (Commerce Square). It is a very interesting structure, and the arches go on for a surprising distance. The framing of the statue was too perfect not to shoot a photo. So I did what I had to do. Shot in September, 2001.

I have mentioned before the importance of objects created by culture. Statues, artwork, architecture, these are all objects that can affect the ideas of someone foreign to where those things were made. Think of this scene near the port in Lisbon. Imagine someone from another culture visits and sees this series of archways, and the statue. Suppose that they want to design and build something similar in their local area. There is a very good chance that the design will be influence not only by what they saw, but also by what they know from their own culture. Imagine how this has shaped the world. How some buildings in some areas look like they are from another, but are built with different materials than the culture from which they are based (due to lack of similar materials in the immediate area). It’s quite interesting to think of how many permutations of objects have been made in such a manner.

Again, a small result of the wonder of globalization. Or is it, perhaps, one of the ingredients?