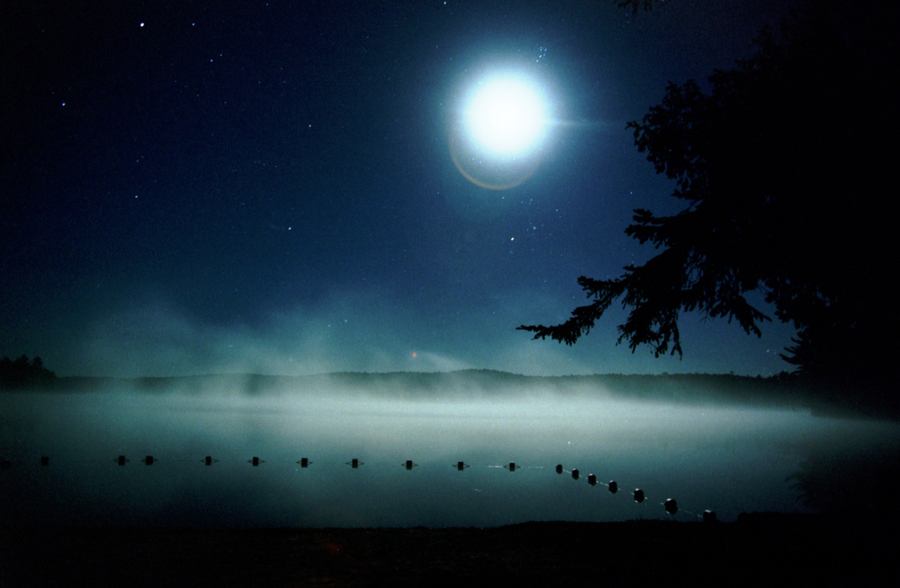 This is one of those rare photos that is a product of patience, skill and luck. In August of 2004, I had tried unsuccessfully to capture a blood moon (I was in the Algonquin interior, and had no tripod). The moon was somewhat bright, but there were other campfires in the foreground, and nowhere really convenient to rest my camera. Needless to say, I was a little disappointed. None of the night shots that I had tried to take of the moon from the city ever really turned out (too little skill and too much light pollution). This particularly cold night in October 2004, on our way back to our interior campsite, we were met with this site at our launch point. It begged to be captured.

And so I used my trusty oil-skin camping hat and a nearby picnic table as my makeshift tripod. I opened up the lens to get as much light as possible, and locked my mirror up. I triggered the shutter via IR, and bracketed changing only the shutter speed. This first try turned out to be the best. The moon is unnaturally bright because of the f-stop being what it was and the exposure being such a long one. The weird orbs around the moon are indicative of the angle of the lens. Most people think that this is a fabricated image. I assure you it is completely real. Imagine canoeing on THAT? Awesome.